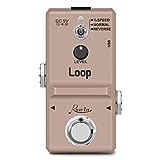 In this article, we’re going to be discussing what the best vocal looper units are, that are available to purchase in 2021.

Well, just in case you are unfamiliar with what exactly vocal loop/voice loop pedals are, they are vocal effects pedals which contain the functionality to repeat an inputted signal and output it repeatedly, whilst still allowing for the output of a real-time signal.

This essentially means that you can record a section of chords, or accompanying guitar melody and then have this repeat in the background whilst you record vocals, or vice versa.

This kind of effect is heavily used by such modern-day musicians as Ed Sheeran and Matt Corby.

It’s important to note, there is a difference between a looper pedal and a vocal delay pedal, with the latter having the signal decay and fade out, whilst the looper pedal’s signal repeats at the same volume, without depreciation, until the footswitch is pressed and the pedal is instructed to stop the signal being sent to the speakers.

If you’re here, you probably want to know what the best vocal loop processors are, alongside the reasons for this, well we’ve included our top …. voice looper pedals below, alongside video demonstrations of them all in use, so you can get a full idea which one will suit your needs more.

WHO IS THIS PEDAL PERFECT FOR

This looper unit is perfect for someone looking for a less expensive vocal looper unit, with the idea to use this in practices and small live performances.

After the feedback we’ve received about this unit, we would recommend this to a hobbyist singer/songwriter/musician.

The BOSS VE 20 Vocal Performer is not primarily a vocal pitch correction pedal,  it’s essentially an All-in-One vocal effects pedal solution, and is designed and produced by Boss, so you know it’s high quality.

The pedal is 1.6kg it’s not the lightest in the world, but it more than makes up for it in its ability to add such creative vocal effects such as radio effect, strobe, and vocal distortion pedal effects.

Allowing for 38 seconds (mono) of looped recording, which is useful for singer-songwriters looking for an innovative way to build up their song’s live instrumentation, layer by layer, directly in front of their crowd.

The pedal also includes Phantom Power, so it is able to power condenser microphones, such as the Rode NT2A.

Who is this pedal perfect for

The JamMan Vocal is perfect for the avid live performing singer/songwriter and band member.

DigiTech has really thought out the design of the pedal and its functionality in particular.

The addition of Silent Clear, which essentially lets you delete a recorded phrase without requiring you to play it first, which eliminates one of those awkward moments on stage.

With that being said, this is definitely a contender for one of the best looper pedals around.

The TC Helicon VoiceLive 3 is the ideal multi-effect vocal solution for singers who are really serious about wanting to incorporate that studio refined sound within their live performance.

Now this will be the perfect multi-effects processor for most professional singers.

However, if you’re looking for increased looping time (5 Hours in total – 8 Mins per track limit),

with the capability to play backing tracks, then I would suggest looking at the VoiceLive 3 Extreme.

The only downside to this device is that it lacks the Midi Syncronisation that the original version has.

You might be wondering, what exactly is the difference between all of these TC Helicon Play processors.

Well, the core functionality is exactly the same,

However, the pedals differ in their guitar effect functionality, as you can see from the chart below.

As you can see from the VoiceLive Play, Electric & Acoustic comparison chart.

Despite the pedals looking very similar and having an identical core functionality, there is a huge difference in guitar effects functionality.

For singers who do not need the added functionality of having an integrated guitar effects processor, I would suggest using the original VoiceLive Play.