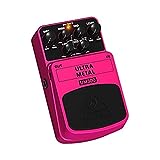 In this article we’re going to be discussing the best vocal distortion pedals in 2021.

However, before we jump into exactly what processors are featured within the list, we want to briefly talk about what exactly a vocal distortion processor does, and when one might be used.

What are Vocal Distortion Pedals?

Vocal Distortion is a vocal effect used to muddy the sound of a vocal signal, for both live and studio vocal takes.

However, with that being said, Vocal Distortion Pedals are more commonly used for live vocal performances since they provide immediate vocal effects, with live performances not allowing the singer the luxury of singing multiple vocal takes to get the perfect sound.

These kinds of processors are generally used within a live performance environment, with it being somewhat difficult to create this effect naturally, unless the actual vocal signal is overdrive, and hence feedback would likely occur.

It’s unlikely that this kind of unit would be used within a studio-environment, with it being easier to be achieved by a studio-quality rack-mountable processor or DAW. However, it may be useful for the ‘basement studio’ user who wants it for both live and studio recording use.

Who is this pedal perfect for

This vocal distortion processor is ideal for use in practices and small live performances. After the feedback we’ve received about this unit, we would recommend this to a hobbyist singer/songwriter/musician.

The BOSS VE 20 Vocal Performer is not primarily a vocal distortion pedal,  it’s essentially an All-in-One solution, and is designed and produced by Boss, so you know it’s high quality.

The pedal is 1.6kg it’s not the lightest in the world, but it more than makes up for it in its ability to add such creative vocal effects such as radio effect, strobe and vocal distortion effects.

Allowing for 38 seconds (mono) of looped recording, which is useful for singer-songwriters looking for an innovative way to build up their song’s live instrumentation, layer by later, directly in front of their crowd.

The pedal also includes Phantom Power, so it is able to power condenser microphones, such as the Rode NT2A.

Well, the core functionality is exactly the same,

However, the pedals differ in their guitar effect functionality, as you can see from the chart below.

As you can see from the VoiceLive Play, Electric & Acoustic comparison chart. Despite the pedals looking very similar and having an identical core functionality, there is a huge difference in guitar effects functionality.

For singers who do not need the added functionality of having an integrated guitar effects processor, I would suggest using the original VoiceLive Play.

The Behringer UM300 is the ideal multi-effect vocal solution for singers who are really serious about wanting to incorporate that studio refined sound within their live performance. The processor has over 500 loaded presets, including vocal distortion and many more features shown below

Now this will be the perfect multi-effects processor for most professional singers.

However, if you’re looking for increased looping time (5 Hours in total – 8 Mins per track limit),

with the capability to play backing tracks, then I would suggest looking at the VoiceLive 3 Extreme.

The only downside to this device is that it lacks the Midi Syncronisation that the original version has.

There’s no surprise that Ibanez has again made it into our pedal recommendations, they have provided a really solid multi-effects pedal that features a stellar looper processor.

The multi-effects vocal solutions we offer are certainly a must for singers looking to transform their performance. You can have a pedal for both studio/live use that has a surplus of functionality.

It really is a small price to pay for such a large sounding difference, suitable for the professional singer/songwriter.