Best Phaser Pedal For Your Guitar in 2021 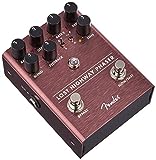 Basically, the first stage of this effect is when the signal of your guitar passes through a series of stages, which are all-pass filters. The second stage is kept as a dry signal.

These two stages are put back together at the end of the signal in order to create an output with an in-phase signal and an outer phase signal.

So basically, when described in its simplest form, the phaser effect is just a modulation effect like the chorus pedal or flanger.

Depending on what type of phaser you have, there are several stages that your sound would have to pass through. Digital phasers often have the ability to simulate various numbers of stages.

Ultimately, the phaser pedal is a pedal that allows you to unleash your full creativity.

There are various phaser pedals on the market, and in the following guide, we’ll take a look at some of the best available and why you should be investing in them.

The Lost Highway phaser pedal is a real analog phaser with some unique features. It’s inspired by the design of vintage analog pedals but is packed full of modern controls that give you full control over the sound.

Thanks to the switchable speed and independent rate and depth controls, which allow you to fine-tune the modulation rate of each section, you’ll be able to do exactly what you want irrespective of how fast or slow it is.

It also has sensitivity controls that adjust when the Lost Highway ramps up from slow settings to fast settings based on your picking dynamics. This pedal has a wave toggle that selects between triangle or sine waveforms and makes it easy to shape your sound.

The advanced controls, such as the feedback and blend, as well as the fast and slow settings, allow you to shape the sound to exactly the way you want it.

The pedal has a stage-ready construction, and all Fender effects pedals are crafted from a durable, lightweight, and anodized aluminum, which also includes LED illuminated controls.

If you’re looking for an unparalleled signal-to-noise ratio, then this Empress Effects Phaser Guitar Effects Pedal is just for you.

It also has a unique VCA base design, and you can choose between two and four stage or Empress exclusive three-stage mode. All of these modes can be controlled via the tap tempo sweeping through an excellent set of eight waveforms.

This pedal is considered the next generation in digital controlled analog technology. It has an all-analog signal path but is controlled by a microprocessor allowing it to keep all its character and analog flavor while still presenting you with tons of possibilities for adaptability and control.

Not only does it offer you the classic jet sounds and the super funky auto-wah and ring modulators, but it also has a vibrato and Univibe sounds on tap.

Ultimately, what sets this pedal apart from the others is the auto modes such as audio-triggered sweeps, envelope following, the rhythms, and direct control are just a few of the features that you won’t find in many other phaser pedals.

It also has great connectivity and features an expression pedal control as well as accepting control voltage, external audio control, and MIDI as well as external tap. All of these features are presented in a rock-solid die-cast aluminum case to ensure that things are kept rugged and clean at the same time.

It works as a series phaser system, and two phasers work together to give unimaginable texture. As a user, you have a choice of three selectable modes in order to shape the series phaser, and this sends a signal through a single 10 stage phaser with the choice of passing through a second phaser.

The EarthQuaker Devices Grand Orbiter V2 Phase Machine Guitar Effects Pedal has one of the most diverse sets of features you will see in a phaser pedal.

This pedal can go from stationary and resonant to slow and mellow as well as fast and swirly before you know it. It has a three-way toggle switch to choose between the ranges of modulation.

Rate one is a slow sweep mode. Rate two kills the LFO and allows you to use the grand orbiter as a fixed resonant filter, and rate three is a fast sweep mode. Ultimately the master rate control fine-tunes the speed of the LFO in each of these modes.

The helix phaser is a versatile phaser pedal that has a built-in tone-print technology. If you’ve always dreamed of taking your tone to inspiring heights, you can do so now with this Helix phaser. Among other features, the phaser has an amazing range of high-quality phaser tones, is tone-print enabled and also features true bypass.

The true bypass feature allows for optimum clarity and zero high-end loss when the pedal is off. It also has an optional buffered bypass mode, which prevents high-frequency loss from long cable runs.

One of its unique features is the kill drive feature, which removes the dry signal path for use with parallel effects loops.

What does a phaser pedal do?

Although it may seem like a complex guitar effect, the way the phaser pedal works is pretty simple.

A basic phaser pedal does the following. The signal coming from the guitar that’s being fed into the pedal gets split into two different signals. While one signal is left untouched, the other is processed by the pedal.

The second signal that gets processed gets phase-shifted to the 360-degree mark until it reaches its original form.

The two signals are combined all the time, and this leads to them canceling each other out until the phase-shifted sections reach the 180-degree mark. That’s when you’ll hear that dip. From this point on, the front of the guitar starts to come back as the shifted signal falls back into phase without the other signal being touched.

The actual shifting part of this process happens once you begin to mess with the controls in the pedal. Depending on the specific model of phaser that you have, these controls can vary significantly.

However, the main ones are usually always present. So the usual phasers have speed, depth, and resonance. What these controls do is ultimately change the point at which the two signals cancel each other out and where they are completely in phase.

By applying these types of changes, you can yield a variety of interesting results, which is why the phase a pedal is amongst the most popular and widely used modulation effects for the last few decades now.

Where does a phaser pedal go?

A phaser pedal fits in just about anywhere if you have a guitar. If you get a model that has some additional range, you can create subtle types of phasing.

This allows it to introduce the phaser in a barely noticeable way while still adding a splash of color to the whole song. Phasers basically attach to your guitar, and while some people believe that it belongs to a certain genre of music or the other, they are pretty versatile devices and can be used with pretty much any genre of music.

Lots all phaser pedals offer a tap tempo as well, which allows you to click in the exact speed you want. You can get your phasers’ speed to match the tempo of whatever song you are playing. This option is not always available, though, but if you have the choice, you should go for the phaser that does offer this option.

These pedals are available in different price ranges, and the more features that you are getting, the more expensive it will be. You should also be aware that cheaper pedals have fewer knobs on the actual pedal, which means fewer options too.

What is the difference between a flanger and a phaser?

People who grew up recording and playing guitar may be familiar with the sound of phases and flangers since they are commonly available as foot pedals.

Experienced guitar recorders will be able to tell the difference between phasers and flangers since they are more in-tune with the sounds that these devices deliver.

However, if you can’t tell the difference between phasers and flangers, don’t worry. Over a period of time and as your experience increases with these devices, you’ll be able to differentiate them from one another.

Flangers usually sound like the jet engine of a plane during takeoff and landing, and phasers sound a lot like a laser beam from a science fiction movie. This is probably the simplest way that we can explain the differences between flangers and phasers.

How to connect the phaser pedal?

Connecting a phaser pedal is pretty straightforward. After you set up your guitar pedals, just step on the phaser pedal to turn it and do exactly what you purchased it to do.

There is, however, a correct way to chain together guitar effects. They are some rules involved, and if you get it right, it will save you a lot of time and help you get started sooner.

Before you start connecting your pedals, you need to ask yourself some questions such as do I get my rhythm sound from my gain pedals or straight from my amp? What type of sounds am I looking for? Which is the most important effect to me? And do I want to emphasize certain sounds at the sake of others?

For a more in-depth explanation of how to connect your phaser pedal, you can follow the steps mentioned here.

Using a phasr pedal is not as challenging as it looks. In fact, it’s quite simple, making it great for beginners to get set up in no time at all.

There are some best practices involved, which we’ve mentioned and it’s important to experiment with your effects and to learn the nuances of how they work as well.

Using the phase of pedal is no different to these other learning processes.

And ultimately, if you keep practicing and experimenting with your phaser pedal you’ll become better at it and soon be able to release a wealth of musical creativity.